Many of Africa’s economies are doing well

March 29, 2020
But there are questions about the best road to long-term growth 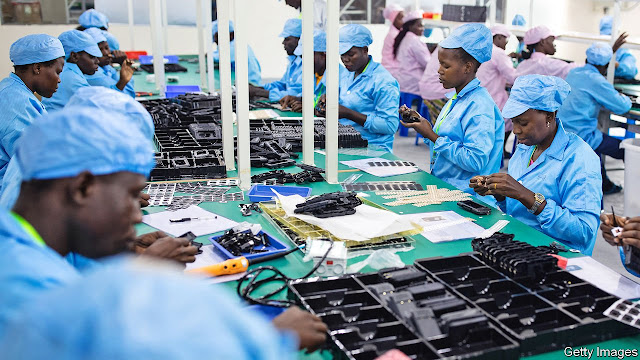 Passing through the gate leading into the Hawassa industrial park feels a bit like crossing a boundary between Africa’s past and a vision of its future. On one side three-wheeled tuk-tuks beep their horns as they swerve around pot holes on the main road running through this southern Ethiopian town. On the other side smooth asphalt forms geometric grids around the rows of new factory buildings that represent one of Africa’s boldest attempts to industrialise by following in the footsteps of Asia.
The park opened three years ago, yet it already employs almost 30,000 people and has plans to double. Most of the young women working in it make clothing for companies such as pvh, which owns brands including Tommy Hilfiger and Calvin Klein. Selamawit Malkato, 20, had never seen a factory until she came to Hawassa. But last year she stood with scores of other hopefuls outside the park’s gates. Her sister already had a job inside, stitching shirts. The days are long; the pay low; the bosses strict. Still, Ms Selamawit travelled 60km from her home village looking for work in firms attracted by a supportive government and duty-free access to American markets. “Being a large player in the apparel industry we need to give it a go,” says Vinod Hirdaramani, a Sri Lankan businessman who has opened a garment factory in the park. “It’s one of the last frontiers of apparel making.”
Please read more @ The Economist