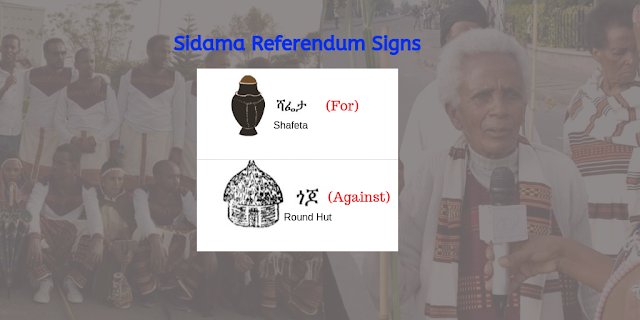 Addis Abeba, September 26/2019 – National Electoral Board of Ethiopia (NEBE) has this morning unveiled the two singes determining whether Sidama Zone will have its own regional state status or will continue as part of the Southern Nations, Nationalities and People’s Regional State (SNNPRS).
In a statement NEBE sent out to local media, it said that the Board was finalizing preparations to hold the Sidama referendum on November 13/2019, the schedule it announced on August 29.
NEBE said it has held consultations with both SNNPRS Council and Sidama Zone Council before reaching conclusion on the referendum signs.
Accordingly voters who would like to vote for the Sidama Zone to become Ethiopia’s 10th regional state and administer itself should mark on the sign of Shafeta, a Sidama traditional bowl; whereas voters who would like to see Sidama zone to remain under the administration of SNNPRS should mark on the sign of the Hut, a Sidama traditional roundhouse.
AS