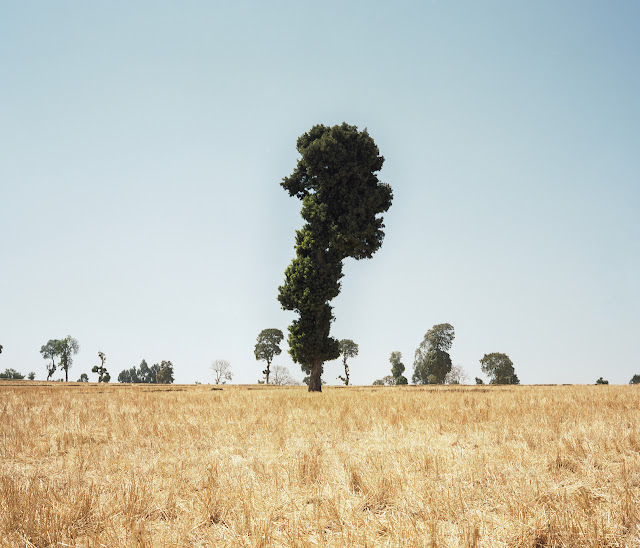 written by Marigold Warner
Clément Chapillon and Fabien Fourcaud document the people and landscapes of Ethiopia’s Sidama Zone – the place where coffee was born, and where coffee could die
Earlier this year, scientists found that 60 percent of the world’s 124 known species of coffee are under threat of extinction. In Ethiopia, Africa’s largest exporter of the bean, deforestation is threatening a major source of the country’s income and the cultural traditions surrounding it.
“Coffee is about connection,” says Clément Chapillon, who collaborated with fellow French photographer Fabien Fourcaud to create The Shade Promises – a new body of work that documents life in the Sidama Zone of Ethiopia, where coffee is believed to have originated. In Sidama, coffee plays a central social and cultural role in the community. Three times a day, families and friends will gather for a coffee ceremony, usually led by the woman of the household. “If they don’t have coffee, these traditions will break down,” explains Chapilon.
The strain of coffee that grows in Ethiopia, coffea arabica, thrives in shade and accounts for 60 percent of the world’s coffee population. However, fewer trees mean less shade, and, due to deforestation caused largely by climate change and infrastructure developments, by 2080 the number of farms able to cultivate coffea arabica could have reduced by as much as 85 percent.
For two weeks, the photographers followed PUR Projet, an organisation that has helped farmers in Sidama to plant more than 500,000 trees. Working collaboratively for the first time, they travelled between villages, photographing the rural landscape and the people who inhabit it.
“It worked because we had a common vision,” says Fourcaud. “I’m more used to looking at houses, roads, and more urban elements. Clement is more focused on people and expression. Thanks to that we had a really large visual vocabulary, and we were able to complete each other’s work”.
Considering that the project is about coffee farming, there is very little imagery directly related to the beans or the beverage. The photographers were more interested in how people were living, and the effects of this on the wider landscape, rather than showing how the crops are farmed. “Not showing the coffee is perhaps a way of talking about something that one day might disappear,” says Chapillon.
This is not the only cliché that they intentionally avoided. The photographers were not interested in documenting the ethnic tribe of the Sidama Zone, or focusing on the country’s fast-growing economy. Rather, the project was an opportunity for them to document everyday life, and the implications that a global issue can have on individual people.
“We wanted to explain the importance of coffee to people, how it is a part of the Ethiopian identity, where coffee was born,” says Chapillon. “But where the coffee was born, maybe it could die.”
fabienfourcaud.comclementchapillon.com