Prime Minister Abiy Ahmed: Too Good to be True! 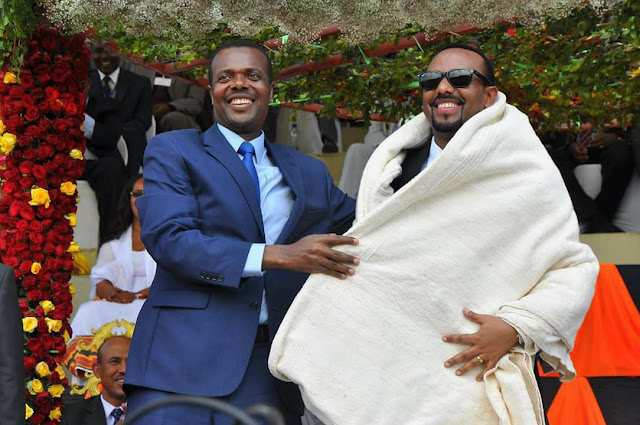 Everything seems too good to be true. I am talking about the political dynamics
in Ethiopia.
The numerous promises of the newly appointed PM and the bold responses he is giving – the dreamlike speeches he has been making – are pushing me to question: are we really living in that Ethiopia we used to know before.
PM Abiy is speaking and acting totally differently than the two decads and plus long culture of EPRDF, the coalition of parties he is now in charge. His words and plans for the new Ethiopia couldn’t be dreamed of in the EPRDF reign. These two things have been vividly seen in the past few weeks:
1) Ethiopia has a parliamentary system of government, but what you see in Abiy is a president in a presidential system.
2) EPRDF adheres an ideology called “Revolutionary Democracy”, a typical Marxist-Leninist view. But if you have listened what Abiy is promising and looking forward to implement, then you will definitely say someone is highly advocating “Liberal Democracy” within that leadership circle.
What is happening here? Are we looking at a real change? If it is an honest change, sure the struggle still continuous.[...]
Of course, the PM has prevailed in many fronts, and most Ethiopians have strengthened their hope. Even those who lost one or more member of their families in the past three years of protest have openly welcomed the new PM as a beacon of hope. However, the last three decades have taught our people to be like Thomas: believing comes after seeing, especially with regard to those countless promises from EPRDF.
Starting from his inaugural speech, the PM has managed to possess the hearts of many – he is the one, many said, who is capable enough to unite us. His thoroughly articulated responses for questions, his apologies for miss perception, and most importantly his adherence to unity – Ethiopianism, have led many to see a bright future for our Ethiopia. This is good, but a bit weird for Ethiopians.
Indeed the PM (or the reformed government) needs time – can’t respond to every claim overnight, not every claim has a response. Yet, we still have the right to doubt – because it is a new thing for us and also because we are the people.
My doubt is this: a PM who is challenged and faced difficulties to release two Monks of Waldba monastery who just opposed a decision of the government to take part of their monastery but end up in prison charged with terrorism, how can then he be able to cause the amendment of the anti-terrorism law.
This was one of the claims by protesters and oppositions. How can he bring the real multi party system before he wins over those determined to control political power perpetually.
A rarely talked crucial point is how very short period the PM has – less than two years. If he succeeds in giving political space for oppositions to actively engage in politics and freely participate in the next election, then that is his deadline. If he fails to deliver what he promised until the election and, even more, if he ends up to be same old EPRDFites that envisions a perpetual political power, then that is also his deadline. People of Ethiopia have realized their potential – how to take down their oppressors.
Currently many want to see PM Abiy separately and different from EPRDF. But they are one and the same, he is the leader of EPRDF in principle. Unless Abiy and whomever is in his team are capable enough to change the whole set of EPRDF to the limit that EPRDF is ready and willing to transfer political power to any party fits, there will not be real power.
So what then? For me, as much as I appreciate what he is doing and what he envisions for our Ethiopia, I really want him to underline that he has a short period of time. A real leader must always know that an election could be an end of his term – we have never seen an implication of this from previous EPRDF leader.
What I know for sure is that our people can’t afford to be let down anymore. I hope Abiy really knows this.
ምንጭ