Farmers on the frontline: Change and transformation in Ethiopia’s (Sidama) watersheds 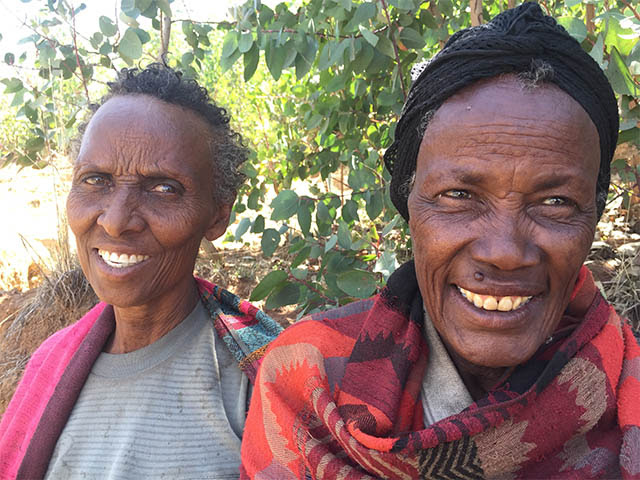 Two women in Sidama Zone, Ethiopia. Alan Nicol
By Alan Nicol and Likimyelesh Nigussie (IWMI). This post first appeared on on The World Bank’s Governance for Development Blog.
Selilah stares out over a landscape she has inhabited for 70 years. In the valley below, deep gullies scar the slopes where rains have carried away the soil. Living with three of her four sons, she is struggling to make ends meet in this part of Sidama Zone, Ethiopia, where, she says, there used to be a forest more than 40 years ago.
Now most trees have been felled and water is scarce. Selilah spends two hours a day collecting her two jerrycans (50 liters) from a neighboring kebele (neighborhood), but when that source fails she has to buy water from a vendor at ETB 6 (30 US Cents) per a jerrycan, a huge cut into her income.
In the last 10 years, she says, the rains have changed – they are lighter than before and more infrequent. As a result, production from her meager plot – just 0.25 ha – is declining. After her husband died more than a decade ago, she now only makes ends meet through the daily wage-labor income of her sons. Like many others, Selilah is on the frontline of climate change in a landscape under increasing pressure.
But transformations are possible. Her friend, Kababot, of similar age and also widowed, nods in agreement as Selilah sets out how she helps to restore their degraded Kolante watershed under a GEF Small Grants Program. Along with other men and women, Selilah and Kababot help build terraces, plant trees and introduce other measures to reduce soil erosion. In return, they receive harvested grasses for fodder, and fruits for consumption. The ecosystem is slowly being restored, but it’s taking huge community effort.
In North Shewa, hundreds of kilometers to the north, farmers are waiting for the Belg (short) rains, this year disrupted by El Niño. The rains are already a month late.
A feeder road completed in the last four years cuts through barren fields, ploughed but still bone dry, where harsh winds carry away the fragile topsoil.
The road has opened up new markets for farmers, including dairy products. But it has also driven demand forkubet, round dung cakes produced by farmers using vital organic matter that would otherwise help bind the soils and increase moisture retention. At the same time they have value as a cooking fuel. A truck load can fetch $1,000. The irony is that farmers stack up piles of kubet for sale while at the same time purchase chemical fertilizers to maintain their crop yields.
These stories have a common thread – that landscapes share an increasingly fragile natural capital base. The importance of integrating landscape protection with measures aimed at supporting the resilience of food production is now the centerpiece of an Integrated Approach Pilot project being designed by UNDP-GEF.  This requires new ways of valuing (and maximizing value from)  natural capital as well as diversifying livelihoods away from reliance on ecosystem resources.
Water-smart agriculture is also a central feature – ensuring that soils are effective soaks and pumps for crop root systems, that watersheds are effective water-harvesting systems and can mitigate the destructive effects of more erratic rainfall patterns in this part of Africa.
Selilah looks out at the recently-planted saplings in the watershed below and talks of the need for her grown-up children (and their children) to work in towns and gain more cash income. Her 0.25 ha of land is unsustainable as a basis for future livelihoods, she says.
In North Shewa, too, a farmer explains how he sees little future for his six children if their livelihoods continue to depend on just a 1 ha plot and the uncertain skies above. He sees technological change as critical to enabling a shift to more productive systems in which his family can shift to refining products and achieving greater value from farming.
Watershed management is now at the center of efforts across Ethiopia to restore landscapes and, through restoration, underpin future production and productivity.  The challenge lies in constructing approaches that are comprehensive enough to have an impact at a landscape scale and that can sustain actions by communities beyond the usual project cycle of 3-4 years. This is truly an inter-generational effort.
Selilah smiles and remembers a past when there used to be animals in a thick forest below. Now too old to travel, she sees her role as an elder and mother deeply involved in restoring the community’s landscape and ensuring future generations do the same.
At the same time, she says, the future belongs not just to ensuring environmental sustainability. It also requires livelihood security and resilience that derives from her children (and their children) having job opportunities and cash income that extend far beyond reliance on the natural capital around them.
Source