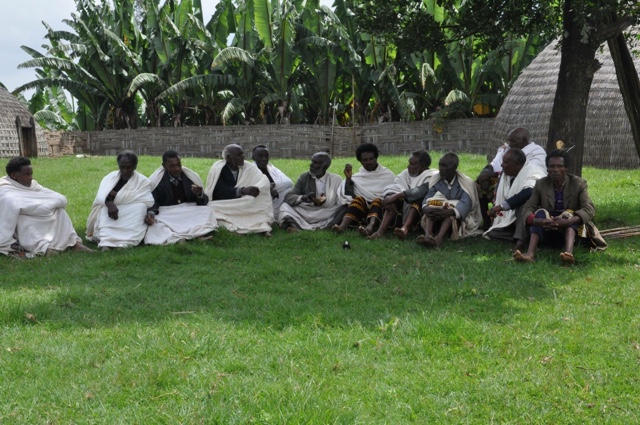 CULTURAL JUSTICE OF SIDAMA PEOPLE
Sidama people have their concept of Seera, which gives them a feeling of identity strong moral commitment, and culturally defined ability to debate conflicts and create consensus. In cultural morality and ethics of Sidama society, truth has great value and justice procedure treat through Halaale/truth principles through analyze by Hayyo/logical reasoning. This could be a strong asset for building a democracy. Among them, Sidama people gather at Gudumale/gathering place and at Mote/chief before Cimeessa/elder; the truth never gets dried up, rather it continues strong and viable. The justice of Sidama/conflicts resolution mechanism is taken place with four levels of councils that deliberate and decide on matters of societal affairs which show the democratic nature of the system. It includes in ascending from lower to high: Olluu Songo (the lowest unit of elders council), Ayidu Songo (medium level council) and Garote Songo (the highest council of elders). These levels of Songo have legitimate authority to deal on different issues and pass decisions applicable in their respective jurisdictions. The role of Songo in the traditional authority is highly capitalized in its exercise of power and authority in mitigating the issue of conflicts. All kinds of conflicts management activities are based on concept of “Halaale”/supreme truth. The core function of the political and administrative system is managing and solving conflicts peacefully between and among the members of the community. The Sidama people`s traditional judiciary system is highly surprising. The strength of this judiciary system lies in bringing together the participation of much reconciliation (Araarsa) between the parties in conflict. The hearing is conducted in a calm manner and deep insight to the cases under discussion. The hearing is performed by local elders, especially by prominent leaders in the shade of an aged tree. It is hearing that is founded on search for truth and justice. The place where tribunal sits is called Gudumale. The Gudumale are structured in hierarchical chain of power. The cases submitted to the tribunal are dealt with depending on their magnitude. The plaintiff or the complaining part presents his case to the tribunal /Songo. After hearing to the case the elders begin the examination and analysis of the case by saying “Affini” which means «Have you heard» and calculate the case among the members of the tribunal. It is discussed thoroughly by valuing every ideas, comments and suggestions forwarded by the members of the tribunal. Then the truth starts to shine in this filtering process. With this, the tribunal begins to step-by-step move to process of forgoing judgment. After the judgment is passed in this way, if there is any party dissatisfied by the judgments, such a party may submit its appeal against the judgments to the next higher Gudumale/assembling place. However, this right is granted only if the elders believe that case is tough enough to call for an appeal. For meeting more time elders uses ancestors burial arias due to these places were believe as safe and  respected; in order to truth never gets dried up. At some places ancestor burial areas and Gudumale/meeting places are separated. The“Gudumales”/ Songo places such as Xumano, Bunamo, and Gadira in Shabadino Woreda, Burxe in Bansa Woreda, Wonkano in Gorchee Woreda, Shiisho in Dara Woreda Bera in Dale Woreda, Garamba in Harbegona Woreda, Manicho in Malga Woreda, are the ideal places to visit cultural justice of the Sidama people. Sidama Zone department of tourism and all Ethiopian tour operators can arrange your tour.
Source: From Social media- Toursim Sidama Facebook